A downloadable game for Windows, macOS, and Linux

This is an entry for Ludum Dare 50.
A 48-hour game jam in which only one person is required to make a game from scratch.

Originally supposed to be submitted for the Jam done in 72 hours, we started a day late and ended up part in the new Extra category, which takes 2 weeks.

Death is not as simple in this world.
As for those who cannot continue on with life any longer the Entity comes.

Q: Is the game supposed to be tedious, and monotonous?
A: Intentionally so, but we did try to make it much easier to be done for everyone. We tested a much more harder version than this (and played through it all) then toned it down while developing the game to what we think should be decent enough!

If you have any questions, feel free to ask on my Twitter: @fiaKaiera

Hi Kai! I played till the end to get to know how terrible I am at games again jk ... it was fun to explore the map with the limitation of sight but with skills to get temporary vision of a spot. Excellent pixel art, good music, simple and clean text/interface. The vibes fit the theme really well. All and all, it was a good experience. I would love to play another game if you make more!

Not much issue that I had while playing. Wish I could play in fullscreen because tilebar and taskbar are sometimes annoying. It seems that Spacebar also works for dashing, which for me, is more comfortable to use on a chiclet keyboard than Shift.

First few times playing, not knowing that the tutorial is there, I spammed R so I accidentally skipped it. After few times restarting, I played the intro, but couldn't continue once I found bushes blocking the way after dashing over the water. Everything else is good!

I completed the game for twice in normal mode. Even though the game in normal mode is touching and enjoyable overall, I felt there are some issues that makes the game less enjoyable than it should. When I told my brother to play the secret mode(I know I can't get through the secret mode), who played different manic shooter games, those issues seriously affect the enjoyability of the game.

There are more serious issues about parry. The direction of parrying always face the Entity and parrying attacks comes with knockback. This is where the problems begins. When a player try to parry attacks coming from behind, the Entity teleport away. It

causes the direction of knockback from parrying and the range of it changes unexpectedly. There is just no point in auto aiming at the Entity as the Entity won't die.

The range of parry doesn't feel consistent as well. Sometimes players can parry attacks in front of them, sometimes can't. Or players clicks the left mouse button and they saw the animation of parrying is being played, and then they were still bing killed.

It is annoying and frustrating to cope with the inconsistencies of the game mechanics.

Although those issues only become serious in secret mode, the game would be more enjoyable even in normal mode (or games base on it in the future) if they can be addressed. This is a good game. Thank you.

First, I’d like to note that I wasn’t able to complete this game, so please take this into consideration with this feedback.

The things I liked about this game: Exploring a map in the dark with an enemy constantly stalking you is a fun idea. The way the Entity’s eyes light up in the dark and fade away constantly is a nice effect. It feels and is threatening. Being able to counter and knock back the Entity feels great thanks to some clean sound and visual effects. As you progress the Entity becomes more and more aggressive adding to the tension of the situation. The fact that this is all happening while you’re navigating a pitch black environment helps create a truly intense experience at times.

I did not understand the objective of the game. I have a clue what it is but there definitely needs to be much more clear communication about what the player is trying to accomplish. The hints given after you die can point the player in the right direction but they seem to be randomized and are only shown after the player has failed. I’m not saying that the game can’t be mysterious or vague to help elevate the game’s world, but it’s hard to connect with that world if the player is constantly lost on what their objective is in it. Although, there is a part of me that kinda thinks the constant dying and vague clues might be tied into the world building, but if so, it is still a frustrating experience for me.

While I adore the exploration while under a constant threat, the map design needs some work. I understand that I’m supposed to be practically blind and balance lighting the way while fending off my attacker. This is a great challenge but the map still feels vague and disjointed. While some glow flowers do make for some landmarks, much of the map looks the same and it often felt like I was wandering around some of the more repetitive dream world maps in Yume Nikki. Again, that might be the point, but from a player’s gameplay perspective, it still makes for a frustrating experience.

I’m torn because I like the concept a lot but there’s definitely a lot of design decisions that could have been reconsidered and improved. I don’t want to be too harsh either because this was made for a Game Jam so I’m sure there were time constraints and cut ideas. I definitely think that this game is worth playing if you’re up for a challenge. I hope you guys continue to work on more games because, despite its shortcomings, this was definitely compelling in many ways.

Thank you very much for the feedback! Let me preface that this is made for Ludum Dare, a game jam made to make games in 3 days. (or 2 days solo) So we have to make do within the time limit. The theme of it is “delay the inevitable”, hence the entity.

So all of the shortcomings, the lack of direction to lead the player, and improvements to the story are a result of that.

The idea and the game are designed around to get around the challenge of finding the way to the end while “delaying the inevitable”. So navigational, memorization and reflex skills are important in this case.

It is supposed to be somewhat frustrating since it’s at the heart of the story. That’s why the death messages keep saying for you to tread on, and, of course, reveal a bit of the story, and make the ending worth it. We did our best to make it easier to at least bear for a very decent amount of time, at least, (for example the generous invulnerability frames) but not make it cheap. (Like hugging the walls to easily find the end without using the Lighterang is one of those use cases)

I agree that the objective is not clear, intentionally so, but we have to insert it somehow to not make it obvious. Also, from watching your gameplay there will be dialog reworking that needs to be done… and a bug I need to fix. (“From your touch” should imply parrying for example, but the flower hitbox is bugged in the tutorial…)

We’ll be patching the tutorial and that one bug I found through your video though!

In any case, we do thank you for the lengthy review and feedback, and we will definitely consider these for the next time we update post-jam or for when we make a new game! The video was definitely very valuable in this regard. 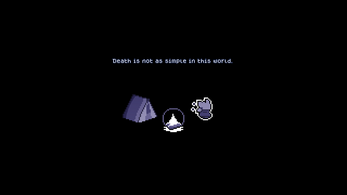